Yesterday I was at Eagles concert in Beijing. It was in Mastercard Arena (formerly Wukesong) which is Olympics basketball arena so it is pretty new.

The concert was sold out but there were many resellers trying to sell tickets in front of the arena. I did not see almost any free seat when I was inside so they were probably very successful or they were selling fake tickets.

At the entrance tickets were checked visually, ticket codes were checked with computer scanners and also infrared light. The security checkpoint was quite vague. They had metal scanners but some people were only checked with manual scanner. Photo and video cameras were allowed and also half meter long  light tubes which I hate because it was very annoying during the concert.

The start time at the ticket said 19:30 and concert started at 19:45 which was surprising because I expected it to start about 1 hour later. There was no support band and when the lights were turned on Eagles just started to play Waiting In The Weeds and later they greeted fans in Chinese. Then they played their first number one single Best Of My Love and continued with their first million selling single Take It To The Limit which I liked very much. The audience was thrilled when Hotel California tunes started. After slow introduction more rock songs followed and I think 18 songs were played in total.

The encore consisted of Take It Easy, Rocky Mountain Way and the last song of the evening was Desperado. Eagles played for 2 hours and I still expected some other songs but the guys are too old :)

There were no standing tickets in the arena, only seats. Chinese authorities probably do not like huge standing crowds. There were many security officials outside and also inside.

Despite copyright announcement and camera restriction announcement many people were shooting with flashes, also video cameras were used. Camera flashes were distracting and I do not understand people who shoot with compact camera flash at concert, anyway the most annoying were flashing light tubes. Anybody did not care about camera restriction during the performance. First videos from the concert were online the same day, you can see Hotel California at Youku.com. Also Eagles branded souvenirs were sold in front of the arena but it did not look like official merchandise which was sold inside.

Visitors were mostly Chinese, maybe less than 10% were foreigners, I met feng shui architect from Taiwan and accountant from Beijing. This was my first big concert in China. It was quite well organised, there were no issues, place was nice and Eagles were great. I am looking forward to Bob Dylan who will be in Beijing in three weeks :) 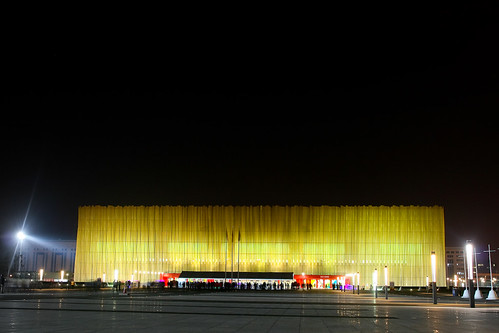